Well that Leprechaun was back again last night and this time he is really was up to some mischief! He blocked the boys doors off with streamers and shamrocks. When the boys opened their doors this morning they were surprised. I don't know about this Leprechaun, (which the boys have named Hissy - I don't know how they come up with their names!) he is kind of a trouble maker. I think we might have to make a trap and try to catch him. I heard leprechauns are hard to catch as they are really fast! The boys and I will have to think of a trap that we can make to catch Hissy. 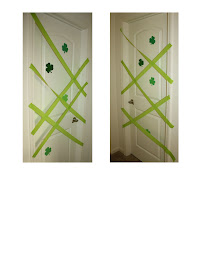